During March to May, house martins began to arrive from Africa for their six month summer holidays again this year in Old Dairy, Okeford Fitzpaine. 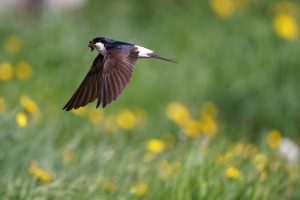 The male bird arrives with a new wife every year, either to the existing mud nest he built the year before or they embark on building a new mud nest together before settling down to raise their chicks, sometimes having two to three broods per season. Phew! Their internal sat navs are the envy of Tom Tom and their ability to attract a new wife every year leaves Henry VIII standing! They have been taking their summer holidays here with us in our little development of 36 new houses since the builders left in 2017.

These amazingly sociable little creatures nest up in our roof barge boards, preferring east and north facing walls but they do love a good apex! They adore nesting together and so we have a selection of detached, semi-detached and terraced nests all in tiptop condition! They chit- chatter all summer through and the sound of their chattering is often described, as ‘scritti politi’ like! It may wake you up at 5am but it is charming and for us, has become the heavenly sound of summer!

House martins in the UK were moved to the Red List of Birds of Conservation Concern (BOCC) in December 2021 following a 72% decline in the last fifty years leading to the risk of extinction in the UK. Not that you would ever think that, if you walked around Old Dairy late afternoon, when the circlage of house martins are feeding and in full throttle and just an absolute wonder to watch! Swooping and diving together for insects in the late afternoon sunshine is a sight to treasure.

Having perambulated Old Dairy again this afternoon, I am thrilled to inform you all that we have a total of thirty-six active house martin nests here in Old Dairy, and they are just the ones I can see on the front of our houses, all with chicks and all being fed and cared for superbly! Quite extraordinary to be honest, and I have already had the pleasure of informing the RSPB and the House Martin Conservation UK & Ireland Facebook public group of this, who are as delighted as we are!

On behalf of our guests, I would like to take this opportunity to thank all of my wonderful neighbours who have welcomed and accommodated our summer visitors despite their sometimes rather untidy housekeeping habits! House martins leave droppings, which, despite posing no risk to humans, can be an issue for some households, but they are easily removed with a hosepipe or brush. Flowerpots can be placed on the ground beneath the nests or a droppings board can be placed at least two metres below the nest cups. Nevertheless, you never quite know what’s going to land on you when you leave the house!

My thanks must also be extended to the House Martin Conservation UK & Ireland Facebook public group who not only so kindly provided me with a generous supply of superb information leaflets concerning our delightful guests which I shared with all my neighbours at the beginning of the season, but also they, and their members, have provided a wealth of advice, support and information online whenever it has been needed.

I am currently running a book on the number of house martin nests per house, which currently stands at a whopping six! Number 25, I am watching you! And with my mere four, I am hoping to match you next year, if not over take you!

On a final note, a very kind friend and neighbour graciously installed three artificial house martin nesting cups on the front of our house earlier this year. Whilst we have been fortunate enough to gain a further three nests from just our one last year, none of our guests have chosen the prefabs! Indeed, to add insult to injury, one cheeky chappy decided to have a laugh and build a nest on top of it! Although I am reliably informed that once the first brood fledges they will likely be moved downstairs to the ground floor! If only our offspring were as reasonable!

If you would like any further information, please do get in touch or indeed come and have a wander around Old Dairy and enjoy this wonderful spectacle for yourself! 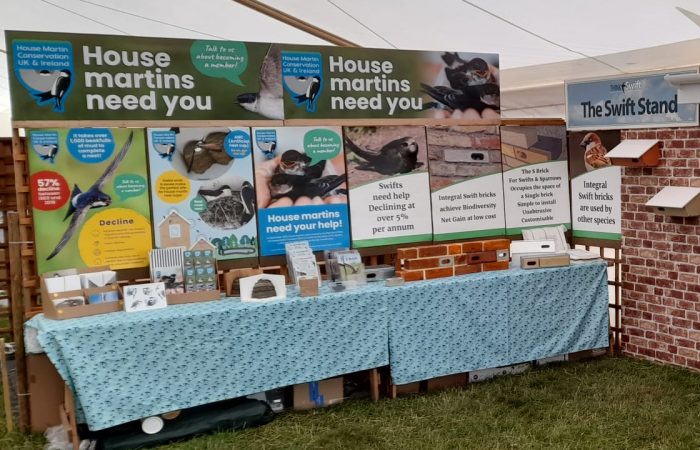 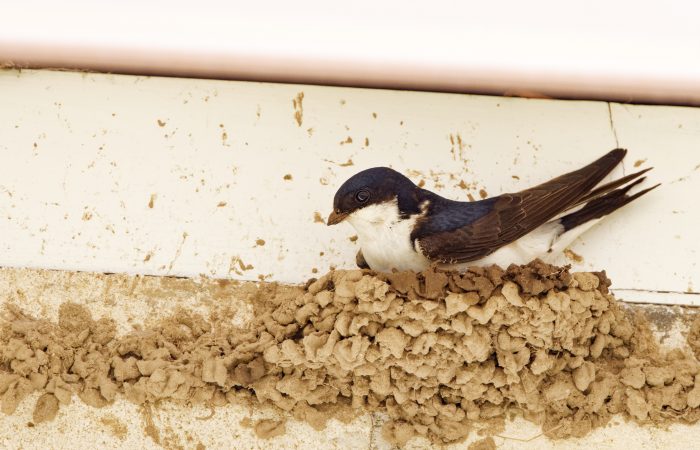 Building a Colony In Oxfordshire