What are nest cups and why should I install them?

Disappearing water ways, drier springs and summers and evaporating puddles that provide vital mud for house martins to build or repair their nests, is a major problem.  In addition, lengthy dry summers can also cause house martin nests to break up or even fall from a house, which is a devastating occurrence when eggs or young chicks are inside.

An important part of house martin conservation is to install ready made nest cups. You can purchase single cups or double cups and put them under your eaves or in false eave boxes as shown in the photo. House martins like nesting in colonies so a double nest cup is ideal if you have room. Check out our top tips below on where and how to place them.

House martins build their nests out of mud and prefer to do so under the eaves of buildings where they are sheltered from the elements and predators. They can do this on lower structures like garages – 2m up, which is another great place to put nest cups. There is also some evidence that they are drawn to white walls as they stand out more.

Where should you place a nest cup?

The first place house martins will prospect will likely be the apex, the next favoured positions are open eaves and soffits/eaves. North, east and west aspects are good but care should be taken when placing nest cups on south facing orientations. Eaves will need to have a deep enough overhang to create shade throughout the day. All nest cups should be placed at a minimum two metre height from the ground.

Placing the nest cup under soffits/eaves

Primarily, it is important that the nest cups’ top boards are butted up tight to the eaves or soffits and the side/s against the rafters where possible. The reason for this is to minimise exposure to the elements and predators.

House martins leave droppings which can be an issue for some households but they are easily removed with a hosepipe or brush. Flower pots can be placed on the ground beneath the nests or a board can be fixed to the wall. The correct positioning of a droppings board is at least 2m below the nest cups. We are aware that some suppliers are providing incorrect information as to this depth thus offering a perch for predators to pick off house martins.

Paul Stevens
Paul Stevens is an expert when it comes to building artificial nest cups, get in touch with him to find out more.
Find out more

Where to buy nest cups

Aside from the amazing nest cups by Paul Stevens, here are our top three recommendations:

*This information was provided to us by Charles Carels, Coordinator of Groupe de Travail Hironelles de Natagora*

“The first house martins to come back are the ‘old’ ones who already nested the year before and these birds will go straight back to their old nests and won’t pay any attention to your calls or new artificial nests!

You should start playing the calls as of the beginning of May and you should keep playing them until the end of June.

Most of the time, new artificial nests are colonised at the end of May or even more often in June. The returns from Africa are spread over a very long period (from the last days of March until mid-June, the large majority coming back around the 15th of May) and the last ones to come back are in a hurry to reproduce but all the old nests are already occupied. They must build new nests which requires a lot of energy and is not always easy when the weather is very dry and mud scarce. Finding an artificial nest is for these late birds, a good alternative.

When possible, play the calls from dawn until sunset. The sound should be audible from 75 metres away. If you are afraid of annoying your neighbours, play them from dawn until 9am, then again from 11 until 12 and a last time from 7 until 9… Sometimes it works after a few hours, sometimes it takes years, but of course; it only works when the environment, building and nest placement 100% match the martins’ needs (and they sure are picky birds!!)” 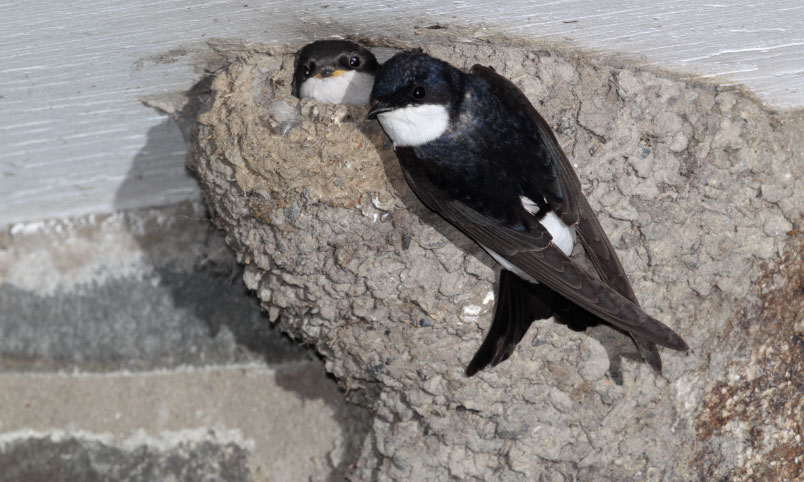 Edd Cottell
Don’t let the house martin disappear, let’s work together to save this enigmatic little bird.
Join us

See the ways you can help protect the house martin.

Check out our top tips – Where to buy nest cups, where to place them and dealing with droppings.

Join us on social media to keep up to date with the latest discussions.